To another year! Next year is the Pearl Anniversary of our first group trip. 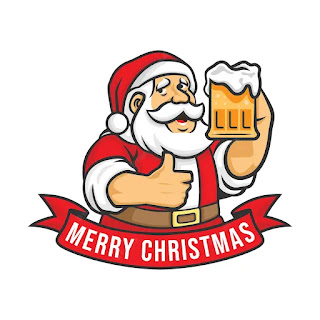 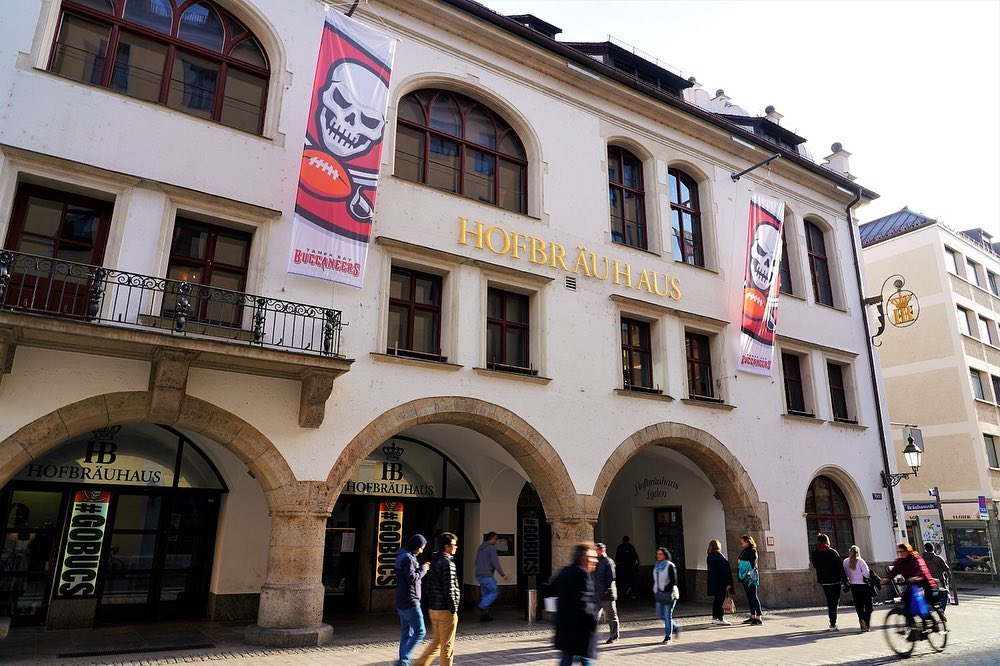 Wow...  Why didn't the Browns think of this?

Here is a new article

Celebration Must Officially Be Brewed in Munich

The European Commission recently recognized the city's brewing history and water supply as essential to Oktoberfestbier.

In October 1810, the man who would become King Ludwig I and Princess Therese of Saxony-Hildburghausen got married in Munich — and they invited the entire city to celebrate with them, to watch a horse race, and to generally have the best time you could have before anyone had electricity. That event was repeated the next year, and the next, and it eventually became the Oktoberfest celebration that attracts over 6 million people and almost as many pairs of lederhosen to Munich every year.

But surprisingly, it wasn’t until this week that the European Commission named the city’s "Oktoberfestbier" — the beer brewed in Munich — as a Protected Geographical Indication of Germany. (That’s an ultra-formal way of saying that the designation means that any beer labeled as "Oktoberfestbier" has to come from Munich.)

"One of the particularities of the beer lies in the use of water drawn from deep springs in the city of Munich, originating in the tertiary layers, up to about 250 [meters] deep," the European Commission said in a release. "The world-renowned reputation that the 'Oktoberfest beer' enjoys today is partly due to the fact that in Munich innovations were introduced very early in the brewing process, which decisively influenced the quality of the beer. The fact that the 'Oktoberfestbier' is brewed especially for Oktoberfest has greatly contributed to the exceptional reputation of this beer."

The beer has long been a centerpiece of Oktoberfest. In 1910, the event’s 100th anniversary, revelers downed an estimated 1.2 million liters of suds which, at the time, was a record. That sounds positively quaint compared to the more modern numbers: According to Bloomberg, the event’s annual beer tab now includes around 8 million liters (and attendees also scarf half a million roasted chickens).

This year’s festival, which was held between September 17 and October 3, was the first Oktoberfest since 2019 as the past two events were canceled due to the pandemic. "There will be an unrestricted [festival] which will hopefully give a lot of people a lot of pleasure," Munich mayor Dieter Reiter announced earlier this year.

And next year will be the first in which Oktoberfestbier has its official Protected Geographical Indication. If that’s not worth raising an extra stein to, we don’t know what is.

here is the coaster or bier mug cover.  Basically says that the it keeps bugs, spit, backwash, shit out of your bier as to keep with the German bier purity law! 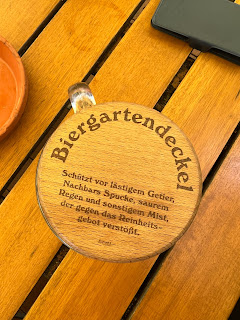 Well, at least for know it appears we will keep this Blog in place. The winter months are traditionally slow anyway, so I will reevaluate the need in the spring.

1. Our band of brothers (and one sister) had a great time. Lots of day trips.

2. Attendance was done from 2019. Everyone thought it would be crazy because of the two cancellations, but no. I even said on each of our visits how slow it seemed. Official estimates say 6.3m people in 2019 with 5.7m people in 2022.

3. Hotel Alfa is struggling. Hope Anton can keep things going. He has lost a lot (most?) of his business travel, which makes tourist/leisure travel so important.

4. Nothing better than a Doner after several Maß of bier.

Here's a quickie for you at our Hacker Tent reservation...... 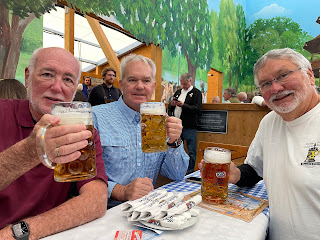 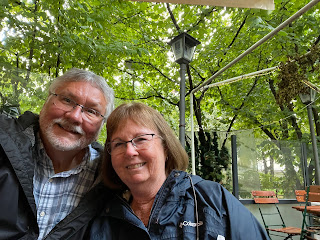 Has this Blog run its course?

We introduced this Blog in 2005 to communicate about our passion for Oktoberfest and München. It was the best way for a global audience to stay in touch and encouraged others to participate. But has the Blog outlived its usefulness?

I could detail many statistics, but this year, with a full-on Bier Immersion assault, we have only seen 34 individual posts (in 2005 we had almost 10x that many, not to mention the comments). This is the least since 2015 which was a non-trip year. In addition, there was not even one post from the front lines during this year’s visit. Have other means of communication surpassed the Blog’s utility? Have we just lost interest in frivolity as we approach our later years? Even some of our core members do not post, do not comment, and may not even read any longer.

So, the simple question is, do we terminate the blog?

As the unofficial Official Blog Meister, I welcome your input. 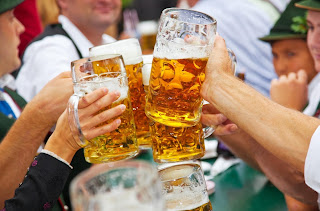 It is official a new word for drinking before 12:00

Frühschoppen (meaning: an alcoholic drink before midday in company) is the German and Austrian tradition to meet up at a pub, inn or tavern in the late morning (usually on Sundays). The specific customs vary from region to region. Frühschoppen is often a kind of brunch, but does not necessarily involve food. Frühschoppen is also often held at fun fairs, the most famous being Oktoberfest or Cannstatter Volksfest.
In Lower Bavaria and most of Upper Bavaria, Frühschoppen is understood to be a specific kind of brunch consisting of Weisswurst, sweet mustard, pretzels, and Weissbier (an unfiltered wheat beer). The Bavarian Frühschoppen began in rural areas and has originally taken place on Sundays in a tavern at the regulars' table (Stammtisch). During Frühschoppen, folk may discuss everyday life and politics. In the corner of the tavern or festival tent (Festzelt) there is typically a band playing Volksmusik. (Nowadays some places have pop, rock, and jazz bands.)
In many other regions of Germany, Frühschoppen is understood more generally to be a gathering in a pub on Sunday morning, traditionally held after church service. This usually includes the consumption of alcoholic beverages, but not necessarily that of a meal. With the decline of church attendance in Germany this tradition has become somewhat less common, but is still held up in many places, especially in rural areas.
Posted by Flying Dan at 10/03/2022 07:07:00 PM 1 comment:

After over 1000 days,  we have Oktoberfest again!

The team is in Berlin!

Not that we will have any kiddie bier

John is not with us so no coors light with a lime.  But it would be nice to see him!

Radler (German for "cyclist") has a long history in German-speaking regions. It commonly consists of a 50:50 mixture of beer and sparkling lemonade. The origin of the name is lost to time, but is presumed to relate to the popularity of cycling and the need for a refreshing, less-alcoholic beverage on the journey.

In northern Germany, a half-and-half made of Pilsner beer and lemon soda is known as an Alster (short for Alsterwasser, German for "Water from the river Alster", a river in Hamburg).

In southern Germany, a mix of Weißbier and lemon soda is called a "Russ'" (Russian).

The invention of Radler has been widely attributed to the Munich innkeeper Franz Xaver Kugler in 1922. However the combination of beer and lemonade is documented in texts dating from 1912. Nowadays, Radler is drunk not only in Bavaria, but also in all of Germany, Austria, Czech Republic, Hungary, Slovakia, Slovenia, Croatia, Poland, Netherlands, and Romania.

In Austria, it is common to use Almdudler instead of lemon soda for the Radler.

During the summer months, Radler is very popular due to its reputation of being a thirst-quencher.

In New Zealand, the names 'reldar' (Radler spelled backwards) and "Cyclist" (the literal meaning of Radler) are used because a large corporation has controversially trademarked the word Radler. It was trademarked by DB Breweries for their "Monteith's Radler" beer, which is a citrus-flavoured, full-strength (5%) beer. 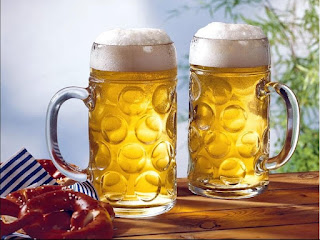 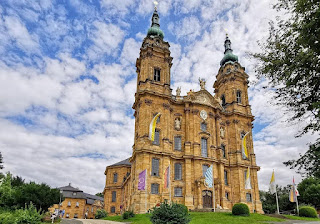 The Basilica of the Fourteen Holy Helpers (German: Basilika Vierzehnheiligen) is a church located near the town of Bad Staffelstein near Bamberg, in Bavaria, southern Germany. The late Baroque-Rococo basilica, designed by Balthasar Neumann, was constructed between 1743 and 1772. It is dedicated to the Fourteen Holy Helpers, a group of saints venerated together in the Catholic Church, especially in Germany at the time of the Black Death.

The Basilica overlooks the river Main in Franconia. It sits on a hillside, and on the hillside opposite is Schloss Banz, a former Baroque abbey. Together they are known as the Goldene Pforte or golden portal, an entryway to the historic Franconian towns of Coburg, Kronach, Kulmbach and Bayreuth.

On 24 September 1445, Hermann Leicht, the young shepherd of a nearby Franciscan monastery, saw a crying child in a field that belonged to the nearby Cistercian monastery of Langheim. As he bent down to pick up the child, it abruptly disappeared. A short time later, the child reappeared in the same spot. This time, two candles were burning next to it. In June 1446, the Leicht saw the child a third time. This time, the child bore a red cross on its chest and was accompanied by thirteen other children. The child said: "We are the fourteen helpers and wish to erect a chapel here, where we can rest. If you will be our servant, we will be yours!" Shortly after, Leicht saw two burning candles descending to this spot. It is alleged that miraculous healings soon began, through the intervention of the fourteen saints.

The Cistercian brothers to whom the land belonged erected a chapel, which immediately attracted pilgrims. An altar was consecrated as early as 1448. Pilgrimages to the Vierzehnheiligen continue to the present day between May and October.

The central scene of the unobstructed and towering high altar is a lager-than-life painting showing the Assumption of the Blessed Virgin Mary. The statues depict her spouse Joseph, her father Joachim, and David and Zachariah.

The Röder Tower in Rothenburg ob der Tauber. From here you can take in great views of the old quarter, and the tower is also a central starting point for Rothenburg's Tower Trail. 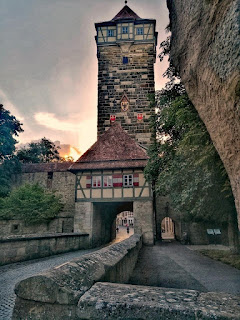 Weizenbier or Hefeweizen, in the southern parts of Bavaria usually called Weissbier (literally "white beer", but the name is believed to come from Weizenbier ("wheat beer"), which is how it is still called in some regions), is a Bavarian beer in which a significant proportion of malted barley is replaced with malted wheat. By German law, weissbiers brewed in Germany must be top-fermented. Specialized strains of yeast are used which produce overtones of banana and clove as by-products of fermentation. Weissbier is so called because it was, at the time of its inception, paler in color than Munich brown beer. It is well known throughout Germany, though better known as weizen ("wheat") outside Bavaria. The terms Hefeweizen ("yeast wheat") or Hefeweissbier refer to wheat beer in its traditional, unfiltered form. The term Kristallweizen (crystal wheat), or kristall weiss (crystal white beer), refers to a wheat beer that is filtered to remove the yeast from suspension. Additionally, the filtration process removes wheat proteins present in the beer which contribute to its cloudy appearance.

The Hefeweizen style is particularly noted for its low hop bitterness (about 15 IBUs) and relatively high carbonation (approaching four volumes), considered important to balance the beer's relatively malty sweetness. Another balancing flavor note unique to Hefeweizen beer is its phenolic character; its signature phenol is 4-vinyl guaiacol, a metabolite of ferulic acid, the result of fermentation by top-fermenting yeast appropriate for the style. Hefeweizen's phenolic character has been described as "clove" and "medicinal" ("Band-aid") but also smoky. Other more typical but less assertive flavour notes produced by Weissbier yeast include "banana" (amyl acetate), "bubble gum", and sometimes "vanilla" (vanillin).

Weissbier is available in a number of other forms including Dunkelweizen (dark wheat) and Weizenstarkbier (strong wheat beer), commonly referred to as Weizenbock. The dark wheat varieties are made with darker, more highly kilned malts (both wheat and barley). The Weizenbocks typically have a much higher alcohol content than their lighter cousins.

The three major brands in Germany are Erdinger, Paulaner and Franziskaner. Other renowned brands are Weihenstephaner, Schneider, Maisel and Andechser. Regional brands in Bavaria are Hopf, Unertl, Ayinger, Schweiger and Plank. The style is currently consumed throughout Germany, but is especially popular in Bavaria. 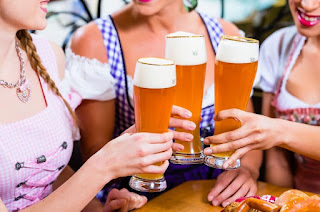 A long read but worth it…

Everything you might ever want to know about the numbers related to Oktoberfest.